"Advertising on Charlotte radio really accelerated our growth," says Jim DaPolito. He and his older brother Steven are the owners and co-founders of the small business.

"Injust three years, with the help of our radio commercials, we had already achieved our year five sales goals."

The brothers were convinced to move to North Carolina from their native Buffalo, New York, by Steven's son, who had moved to Charlotte in 2007. 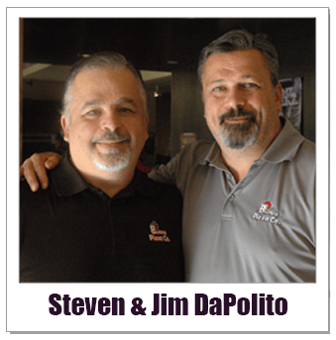 My son believed that someone could do very well down here serving up Buffalo-style pizza and wings," says Steven. "So, when he told me my first grandchild was on the way, I decided to quit my job in the automotive business in New York and move to Charlotte to open a restaurant."

Fortunately, Jim, who had 38 years in the food business, including running the largest pizza restaurant in the country, decided to make the move with his brother.

In 2013, the brothers from Buffalo opened up their first Bisonte Pizza Co. restaurant in the booming residential community of Matthews, North Carolina, about 12 miles southeast of Charlotte.

'Bisonte', by the way, is the Italian word for Buffalo.

"Our earliest marketing consisted of us, literally, driving around Matthews and Indian Trail, leaving our menus and coupons at every house in the area," says Jim.

"During the first week we were open," adds Steven, "we rang up $6000 in sales. Today, we do twice that amount in a single day. Radio advertising has been a large part of that success."

"An account executive for a local radio station was a customer of ours. He suggested that we participate in a contest his station was conducting to determine which restaurant had the best pizza. So with just one week's notice, we entered," says Jim. "Coincidently, the contest occurred our first anniversary in business."

"On the day of the judging, we drove up to Charlotte with boxes of our Buffalo style pepperoni pizza on a sesame crust. We were alarmed to see that several of our competitors were there with ovens making their pies fresh. We thought we were sunk," says Steven.

But to the brothers' surprise, the judges unanimously named Bisonte Pizza Co. as the Best Pizza in Charlotte. The title came with a $5000 advertising schedule across three local radio stations.

"We took the prize money and added another $6000 of our own to run our first advertising campaign on Charlotte radio," says Steven.

"We saw a spike in sales almost immediately after our radio commercials began," adds Steven. "Combined with our other localized marketing, radio advertising's broader reach helped us to achieve double-digit growth for seven straight years."

In June of 2016, Bisonte Pizza Co.'s accelerated growth allowed the brothers to open up their second location, a 4100 square foot restaurant on Trade Street in Charlotte.

"The radio advertising we had been doing for the five years prior to our new store opening allowed us to hit the ground running in Charlotte. People already know who Bistone Pizza Co. was and were anxious to try it," says Steven. "We were successful in the new store from day one."

Since the DaPolito brothers opened up their first store in 2013, the number of pizza restaurants in the area have grown from 912 to 987. Each fights for a slice of the $463 million Charlotte residents will spend in that dining category.  Market research indicates radio advertising is the most powerful way to reach pizza customers.

Every week, according to Nielsen, Charlotte radio reaches 91% of all consumers who used a pizza restaurant in the past 30 days. This is significantly more than are reached by local TV, newspapers, social media, or streaming audio sites like Pandora and Spotify. 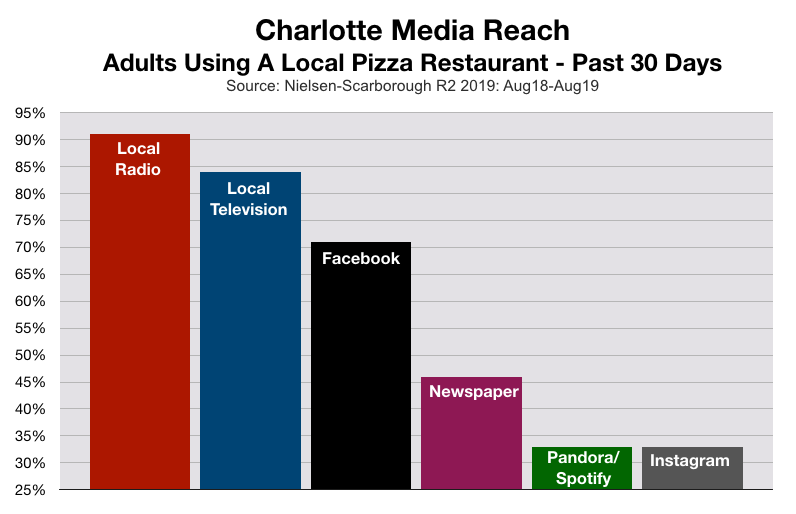 "More importantly," says Steven, "Radio advertising allows us to use specific radio stations to target our two types of consumers.  In Matthews, our customers are primarily families. In Charlotte, we serve many more singles and millennials."

Radio's reach is ubiquitous among both of Bisonte Pizza Co.'s key demographics.

"We are on the radio every week of the year," says Steven. "The cornerstone of our campaign is feeding local DJs pizza and wings every Friday while they are on the air.  We can really capitalize on their celebrity to build the Bisonte brand. Their audiences really trust them."

"After all these years," he says, "advertising on Charlotte radio combined with our couponing, social media, and community involvement continues to fuel our growth.  Last year our sales were up 15%, which is very strong for a mature business like ours."