Charlotte business owners are expected to spend $167,546,000 on streaming video advertising in 2021, according to Borrell Associates, a company that tracks online marketing expenditures across the country. This spending will be 21% higher than in 2020.

This type of streamed video content is known collectively as OTT (Over-The-Top-Television) or CTV (Connected-Television). These two terms are sometimes used interchangeably but do have a subtle difference.

In Charlotte, according to Nielsen, OTT/CTV has exceeded the weekly reach of local newspapers and streaming audio services such as Pandora and Spotify. The medium is rapidly approaching the reach of local cable and broadcast TV stations. 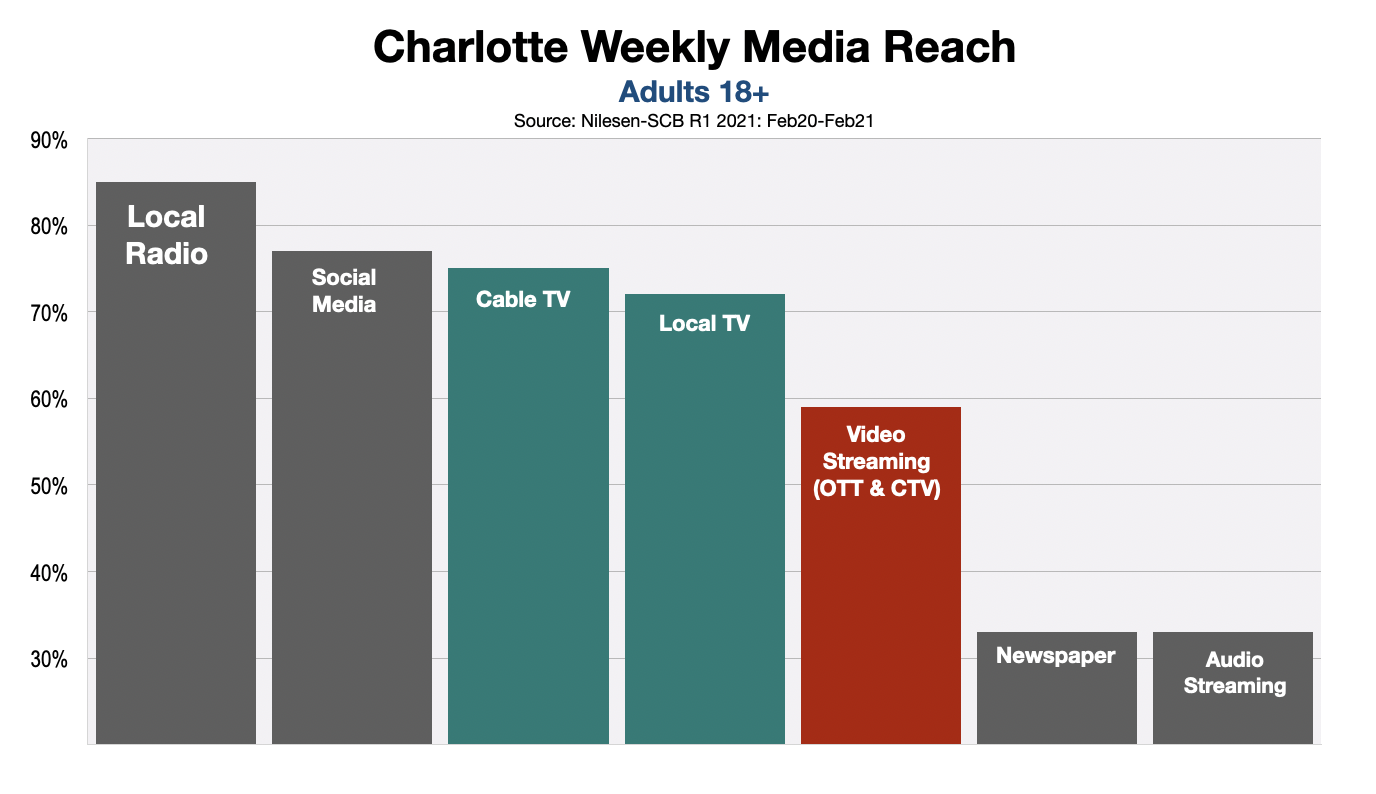 A Nielsen report from May of this year reveals streaming video accounts for 26% of all the time consumers spend in front of a screen.

Until recently, most video streaming networks like Netflix and Hulu relied only on subscription revenue and did not offer advertising opportunities.  This is known as SVOD (Subscription Video On Demand)

To expand viewership amongst local consumers, other streaming networks are offering free or low-cost options. The trade-off, however, is that the content contains advertising, similar to traditional cable and TV.  Because these channels make money from advertising revenue, they are called AVOD (Advertiser-Supported-Video-On Demand). The most well-known of these channels are NBC's Peacock, Hulu, Paramount+, Fubo, Vudu, RokuTV, and Crackle.

According to IAB, 45% of all consumers who watch OTT/CTV regularly are tuning in to AVOD networks. This makes OTT/CTV a viable advertising medium for Charlotte small business owners to market their goods and services. And that's why expenditures for streaming video advertising are soaring.

As more Charlotte small business owners consider migrating their traditional TV and cable advertising budgets to streaming video, there are several words and phrases they should become familiar with.

Adding OTT/CTV advertising to a marketing campaign is not difficult.


Charlotte small business owners and marketers can purchase OTT/CTV advertising through several local media companies, including Beasley Media Group. The cost to advertise is based on the number of advertising impressions utilized.